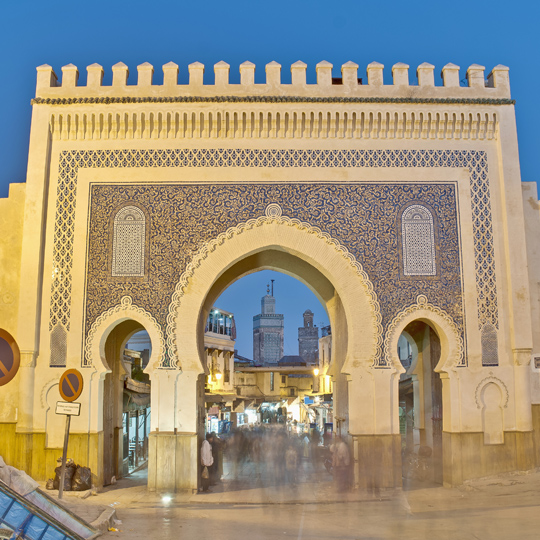 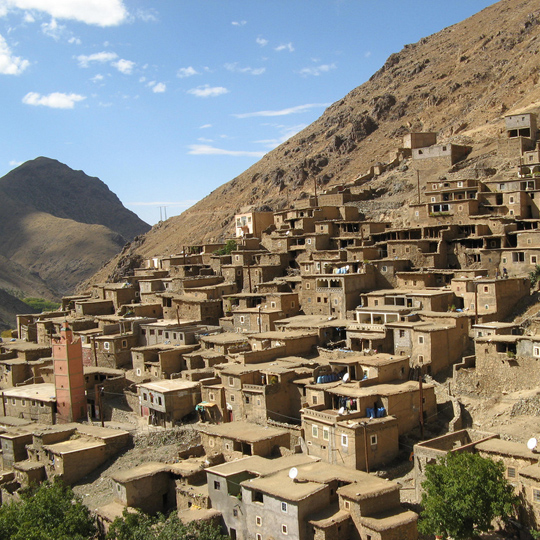 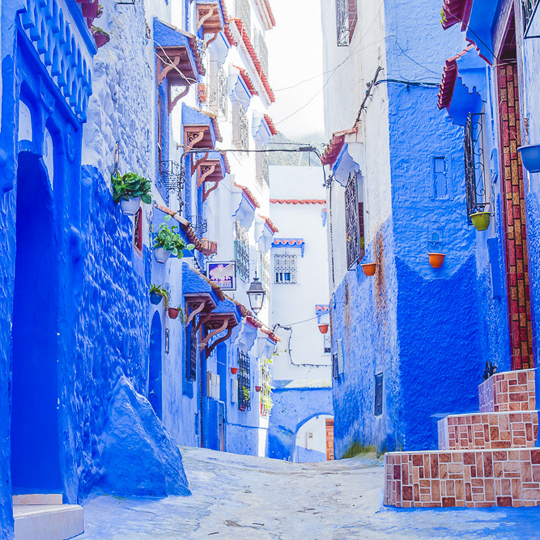 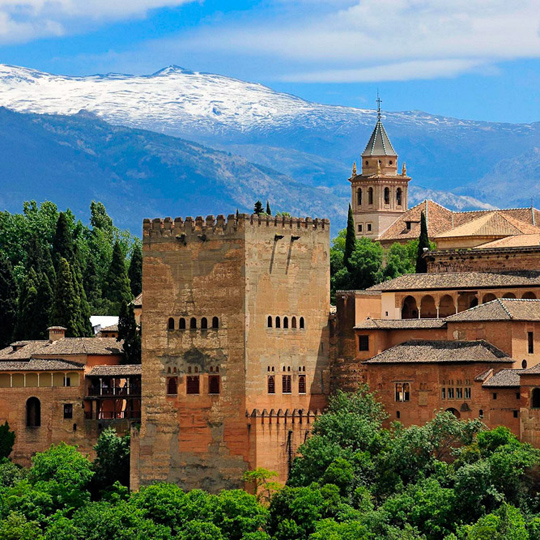 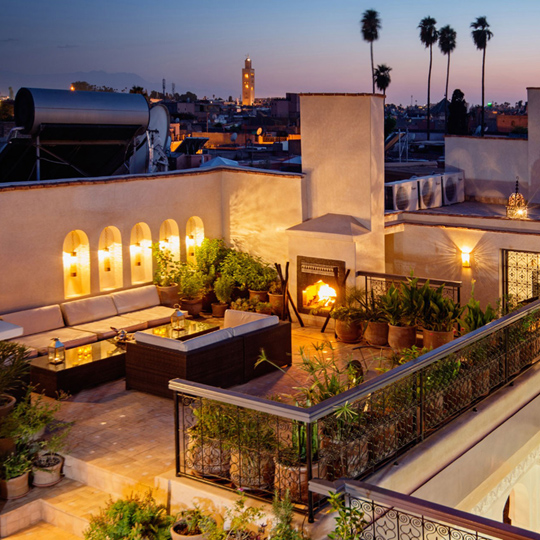 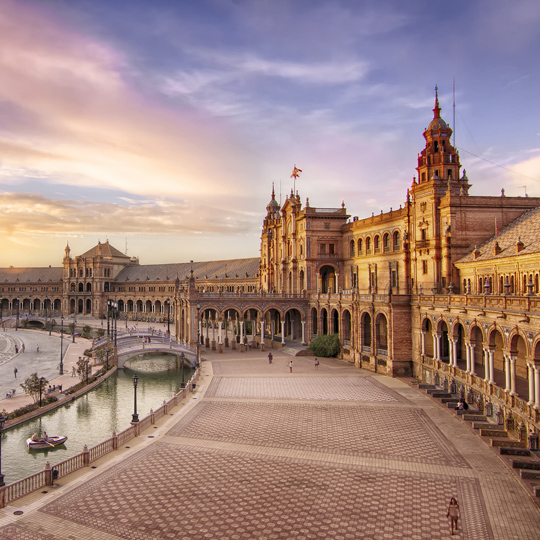 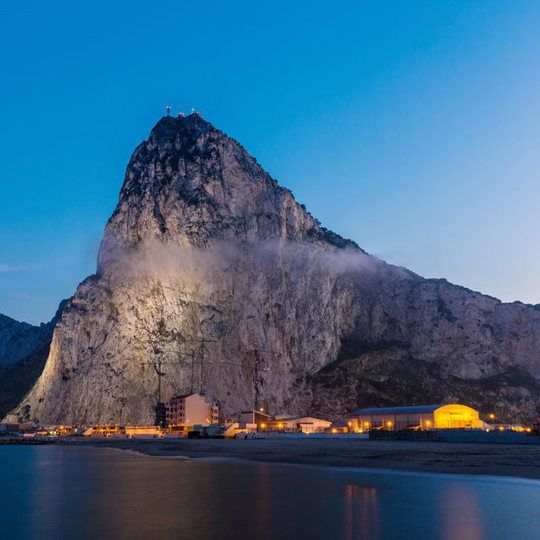 Spain & Morocco
This exciting tour combines the allure of Spain with the exotic highlights of Morocco. Explore Seville, Grenada, Fez, Marrakesh and the Atlas Mountains. Travel through the Sierra Nevada Mountains on a high-speed train and take the 8-mile ferry ride from Europe to Africa across the Strait of Gibraltar. This trip is an adventure in the making with a postcard view around every corner.

Board your International flight to Seville, Spain with plane change in Amsterdam or Madrid.

Begin your journey in the beautiful city of Seville. Seville is the capital of southern Spain’s Andalusia region. It is famous for flamenco dancing. You will visit the ornate Alcázar castle, built during the Moorish Almohad dynasty, and the 18th-century Plaza de Toros de la Maestranza Bull Ring. You will then visit Gothic Seville Cathedral, the site of Christopher Columbus’s tomb, and the Giralda, a minaret turned bell tower.

Enjoy the scenery of Spain’s Sierra Nevada Mountains by traveling from Seville to Granada by train. Upon boarding a high-speed train, you’ll head east through the heart of the country’s breathtaking Andalusia region.

Today you will visit the Alhambra Palace and Gardens. Upon arrival, you'll meet your local guide who will escort you through the magnificent grounds. The Alhambra rises up like an imposing castle with its distinctive reddish stone in its ramparts that prevent the outside world from seeing the delicate beauty enclosed within. Originally designed as a military area, the Alhambra became the residence of royalty and the court of Granada in the middle of the thirteenth century. This complex of monuments also has an independent palace opposite the Alhambra surrounded by orchards and beautiful gardens which you will visit.

Welcome to Morocco! Enjoy the short ferry ride across the Strait of Gibraltar from Spain to Tangier in the Northern part of Morocco. Enjoy a city tour of Tangier and its surroundings, including the Spartel Cape and the Hercules Caves. Marvel at the picturesque views of the Atlantic Ocean and the famed Strait of Gibraltar, a perfect photo opportunity. Mingle through the Kasbah district, located next to the port, before heading towards the old medina. Visit some of the many shops that line the streets of the medina.

Travel today to the beautiful city of Chefchaoue, the blue city. Chefchaouenis a city in the Rif Mountains of northwest Morocco. It’s known for the striking, blue-washed buildings of its old town. Leather and weaving workshops line its steep cobbled lanes. In the shady main square is the red-walled Kasbah, a 15th-century fortress and dungeon.

Explore the cultural and spiritual center of Morocco during this full day tour of Fez. Artisan workshops in the medina are as active today as they were 100 years ago, and strongly contribute to the city’s industrial economy. Enjoy the guided tour of the winding maze of souks (marketplaces) in the old city. Amongst the many shops and stalls are artisans’ workshops and studios including leather working, ceramics, silk, tapestry, and sculpting.

Travel from Fez to Marrakech, making a lunch stop en-route. Explore the rugged terrain of the Atlas Mountain range, boasting towering cliff faces and incredible passes. Drive by the scenic berber villages of Immouzer de Kandar and the university town of Ifrane for a glimpse into rural living in Morocco.

Enjoy a day tour of Marrakesh, a former imperial city in western Morocco. Marrakesh is a major economic center and home to mosques, palaces and gardens. The medina is a densely packed, walled medieval city dating to the Berber Empire. It is a maze of alleys where thriving souks sell traditional textiles, pottery and jewelry. A symbol of the city, and visible for miles, is the Moorish minaret of 12th-century Koutoubia Mosque.

Explore the Berber villages of the Atlas Mountains on a full-day trip from Marrakech. Discover broad valleys, lush orchards and stunning views of Mount Toubkal, the highest peak in North Africa. Ride a camel through a broad gorge, pause for tea in Imlil Valley, then visit the isolated village of Ait Souka. Share a meal in a Berber family’s home, and take in the mountains’ iconic sights: terraced gardens that climb steep hillsides and the lovely waterfalls of Azroul and Taourirt, an alpine community with an exquisite kasbah.

Travel from Marrakech to Casablanca’s international airport for flight back to USA.